After a wild year for the cannabis sector, it’s appropriate that 2019 kicks off with a focus on Aphria Inc., the Canadian pot producer that was attacked by short sellers and is now the target of a hostile takeover bid.

Aphria reports results for the fiscal second quarter on Jan. 11, and there will undoubtedly be plenty of questions on the conference call about the allegations from short sellers that it overpaid for “worthless” assets in Latin America. Aphria called the claims by Quintessential Capital Management and Hindenburg Research “malicious and self-serving.”

The saga took a new twist in the quiet days between Christmas and New Years, when Green Growth Brands Inc. proposed a hostile bid for Aphria, whose stock lost a quarter of its value in December. The potential offer, which has yet to be finalized, raised further questions about Aphria’s links to the much smaller Green Growth, with short-seller Hindenburg Research saying it’s “likely an attempt to generate the appearance of demand in the hopes of spurring credible offers.” Aphria said the offer, valued at C$2.8 billion ($2.1 billion) at the time, “significantly undervalues the company.”

The fallout will affect the sector as a whole, resulting in “greater emphasis on corporate governance, deal due diligence, and M&A valuations,” Andrew Kessner, analyst at William O’Neil & Co., wrote in a recent note.

Aphria played just one part in a hectic year for the burgeoning cannabis sector. At the beginning of 2018, former U.S. Attorney General Jeff Sessions had just thrown a wrench into states’ legalization plans, Canada’s recreational market was still just a campaign pledge by Prime Minister Justin Trudeau and pot stocks were trading well above current levels.

In terms of stock performance, the BI Global Cannabis Competitive Peers index sank 54 percent in 2018. It was a wildly volatile year for many pot stocks, but none could match Tilray Inc., the only cannabis stock to be listed solely on a U.S. exchange. It closed the year up 315 percent from its July initial public offering, but that represents a major come-down for investors -- at its highest point in September, it was up 1,665 percent. The stock peaked at $300, and now trades close to $70. It still has a market value of $6.6 billion, surpassed only by Canopy Growth Corp. among pot firms. 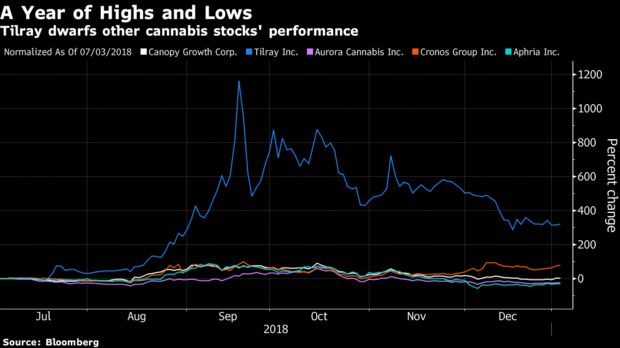 It’s going to be hard to top the action-packed year that was, though 2019 will have almost as many catalysts for cannabis investors as 2018.

What to Watch This Year

D.C. residents to vote on decriminalization of ‘magic mushrooms’ on November ballot