How One Mass. Town Learned To Love The Cannabis Business

Voters attending the Fall Town Meeting in Uxbridge Tuesday night will be asked if they want to remove a cap on the number of cannabis businesses allowed in the town. The Cannabis Control Commission has already granted five licenses in the town of roughly 14,000 people.

Four other Uxbridge businesses have applications in the queue waiting for the commission to act, and the town has heard from more businesses wanting to set up shop.

Caroline's Cannabis opened in March. It's tucked in the back of a metal building that houses a carpet store and hair salon out front.

"So we are the first store retail store in Uxbridge to open, and we're doing very well," said owner Caroline Frankel as more than a dozen customers lined up outside, waiting for a chance to get inside the tiny retail space which can only accommodate two or three patrons at a time.

"We're seeing approximately 500 customers a day and it's all positive. So yeah, I'm very excited about what's going on," Frankel said.

Uxbridge wasn't Frankel's first choice. She wanted to set up shop closer to her home in Northbridge, but found the town unreceptive to the business. Uxbridge, she said, is a different story.

"They were really in support of what we were trying to do and supportive of small business," said Frankel. "And I think that's really what's going to set Uxbridge apart."

Uxbridge resident and cannabis entrepreneur Kim Gibson agrees. She, her husband Fred and son Joe own Gibby's Garden, one of four cannabis microbusinesses licensed in the state. Their facility is located right behind Caroline's Cannabis in a nondescript industrial building.

Kim Gibson said the town contemplated a one-year moratorium soon after cannabis was legalized in Massachusetts.

"Fred jumped out of his chair and went down there to protest," she said. "But we didn't really even need to because the townspeople stood up, one after another, and said, 'Look: New high school. New fire department. New sewer treatment plant. This is an opportunity for us to bring some of that revenue back. We're doing it.' And the selectmen backed off and didn't put any moratorium on it."

If you look at a map of cannabis businesses in Massachusetts, you'll see a cluster of them located in Uxbridge. All are close to Route 146, the highway that connects Worcester and Providence, the second- and third-largest cities in New England.

"We're looking for the right ushers of the product — of the plant — to be working with us, and we've really lucked out. We have the first woman-owned business here. We also have the first micro business license here," said Mandile, who was elected to the board of selectmen earlier this spring. While he didn't run on a cannabis platform, people in town knew the disabled Iraq War veteran as a cannabis patient, and advocate.

The cannabis businesses in Uxbridge seem to be filling a void.

Interim Town Manager Pete Hechenbleikner said the town views the cannabis businesses as something of an economic savior.

"We used to have mills coming out our ears and we don't have those, obviously, so something has to replace that," said Hechenbleikner.

Other Uxbridge businesses appear to be prospering since the town opened its doors to the cannabis industry. Seth Dudley parked his hot dog trailer outside the local VFW, less than two miles down the road from Caroline's Cannabis. Many of Caroline's customers are now his customers as well.

"They're generally a very happy people," said Dudley as he worked the grill to serve his lunchtime customers. "If you've ever waited in the line down there, it's like waiting for a ride at Disney World that they all can't wait to get back on the ride again. All happy people waiting in line. And I see nothing but an increase in traffic here in town." 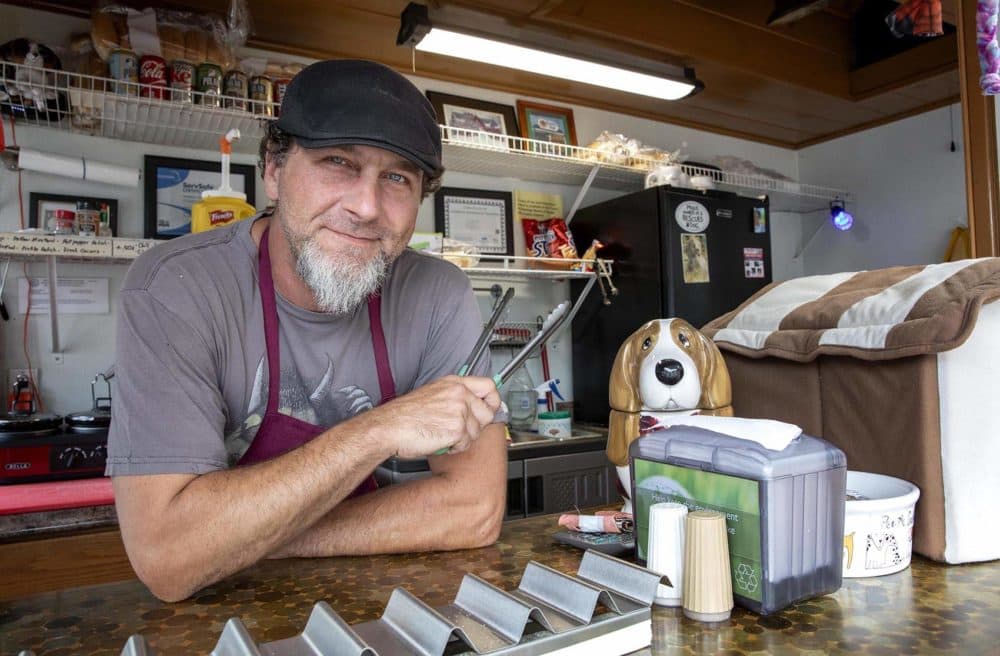 Dudley said he hasn't seen a downside to the new industry. Neither has Uxbridge resident Dave Kozak.

"I'm completely for it, and I think it brings not only a good medicinal purpose to it but it kind of takes it out of the back alleys, so to speak," Kozak said. "It does add revenue to the town so I don't see anything wrong with it, and from what I've seen, it looks like it's headed in the right direction."

That direction could very well include more cannabis businesses, as a town that at one time contemplated a year-long moratorium, may soon completely remove the cap on marijuana enterprises.