With police out in full force this 4/20 weekend, a safe ride is 100 percent worth the cost — and the two car rideshare giants are taking the edge off by offering discounts for those celebrating/rallying for the cannabis cause in Denver and beyond.

The promotions launch as the Colorado Department of Transportation amps up its efforts to keep stoned drivers off the road. The state agency’s recent survey called The Cannabis Conversation shows some alarming data. Out of 11,000 anonymous marijuana users and non-users:

Lyft is teaming up with 420 On the Block, CDOT, Super Troopers 2 and the Marijuana Industry Group to drive the message home to Denver: This 420, Don’t Smoke and Drive. For new and existing Lyft users, the ride share is offering: 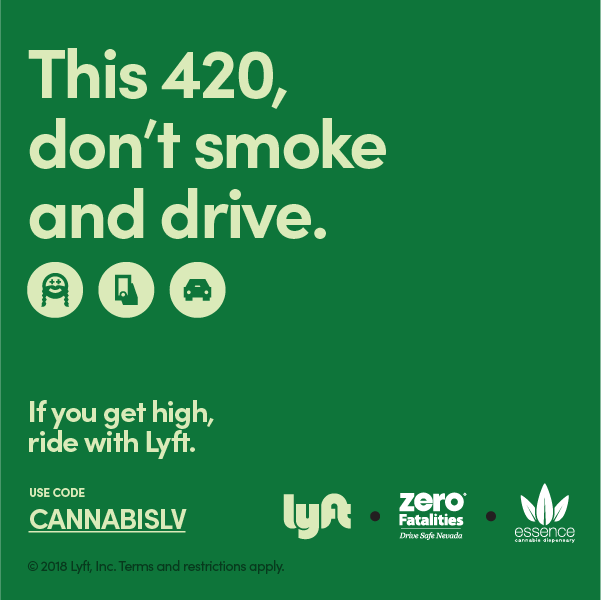 Lyft has also take to the streets of Vegas for the first time with it’s partnership with Zero Fatalities and Essence Cannabis dispensary. If in Vegas use the code CANNABISLV for $4.20 off two rides for Lyft.

MADD Mothers Against Drunk Driving, the Colorado State Patrol, Native Roots and Uber are partnering up again in 2018 with their safe driving campaign. “Take the high road this year, and don’t DUI!”

Colorado State Patrol troopers warn that they will be out in “full force to keep the roads safe” throughout the month of April. CSP says it has issued over 3,000 marijuana related driving citations since legalization in 2014.

Local dispensary chain Native Roots will offer a limited number of Uber discount codes to be given out at their dispensary locations. Uber Safety Spokesperson Tracey Breeden added: “Marijuana impaired driving is a 100% preventable. By providing people with safe ride options, we believe we are empowering people to make better, safer choices. With our technology, we want to help everyone have a safe 420 week.”

Why the Pandemic Was a Breakout Moment for the Cannabis Industry